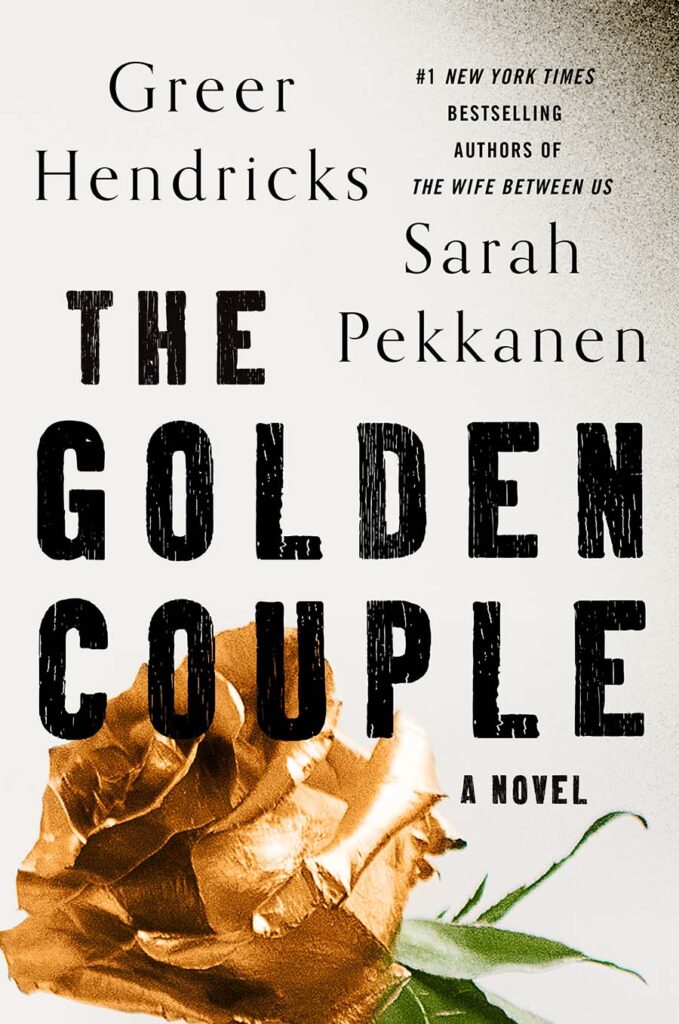 The Golden Couple is the next electrifying novel from Greer Hendricks and Sarah Pekkanen, the #1 New York Times bestselling author duo behind You Are Not Alone, An Anonymous Girl, and The Wife Between Us.

If Avery Chambers can’t fix you in 10 sessions, she won’t take you on as a client. Her successes are phenomenal–she helps people overcome everything from domineering parents to assault–and almost absorb the emptiness she sometimes feels since her husband’s death.

Marissa and Mathew Bishop seem like the golden couple–until Marissa cheats. She wants to repair things, both because she loves her husband and for the sake of their 8-year-old son. After a friend forwards an article about Avery, Marissa takes a chance on this maverick therapist, who lost her license due to controversial methods.

When the Bishops glide through Avery’s door and Marissa reveals her infidelity, all three are set on a collision course. Because the biggest secrets in the room are still hidden, and it’s no longer simply a marriage that’s in danger.

“This is my favorite kind of thriller: a guessing game filled with characters you care about and twists you don’t see coming. The Golden Couple takes a deep dive into a marriage, where what you see on the surface is not necessarily the truth, and the results are mesmerizing. Add to this a therapist who doesn’t play by the rules and you have an utterly compelling, spellbinding read.”
—LISA JEWELL, author of Then She Was Gone and The Night She Disappeared

“A propulsive, twisty, unputdownable thriller—with two heroines you won’t be able to get enough of . . . and a twist you’ll never see coming. Hendricks and Pekkanen have outdone themselves!”
—LAURA DAVE, author of The Last Thing He Told Me

“A riveting cat-and-mouse game of a novel that explores the intricacies of marriage, and the many ways in which people lie to themselves . . . and others. This is a psychological thriller in every sense of the word.”
—LORI GOTTLIEB, author of Maybe You Should Talk to Someone

“Propulsive and thrilling. The Golden Couple grabbed me from the first page and didn’t let go. A page-turner that will keep you guessing until the very end.”
—TAYLOR JENKINS REID, author of Malibu Rising and Daisy Jones & the Six

“A genuinely juicy, propulsive, page-turner about the truths and lies in a complicated marriage.”
—Patriot Ledger

“Suspenseful . . . The authors keep the pages turning. This one represents a return toward the high standard of their early nail-biters.”
—Publishers Weekly

“Dual narrators leave you as sorry to say goodbye to one’s point of view as you are desperate to say hello to the other’s.. the next Gone Girl.”
—Reader’s Digest